Full Name
Aviva Rosman
Job Title
COO
Organization/Company
BallotReady
Speaker Bio
Aviva Rosman is the COO and co-founder of BallotReady, an award-winning voter guide to every race and referendum on the ballot. Started in 2015 with support from the National Science Foundation, the Knight Foundation, and the University of Chicago's Institute of Politics, BallotReady makes it easy for voters to vote informed on their entire ballot.

Aviva grew up working on campaigns at all levels, including her own successful run for local office. She began her career teaching high school math and leading the special education department as a corps member with Teach for America and has a background in policy, government, and management consulting.

Aviva has been named one of Chicago Crain's 20 in their 20s, Pacific Standard's 30 Thinkers Under 30, WeWork's Young Innovators, and was honored with the 2017 Midwest Women in Tech Award for Social Impact. She serves as a mentor at 1871 and lectures on entrepreneurship at the University of Chicago's Harris School. Aviva has a BA and masters' from the University of Chicago, both in public policy.
Speaking At
New Challenges, New Solutions: Meet the Innovators of the Social Good Startup Challenge 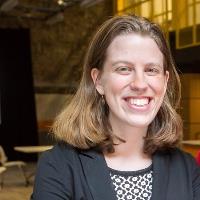