Will Wellman is an Instructor for Blackbaud University. Will is responsible for Financial Edge and Raiser’s Edge customer education, while enriching the customer journey throughout Blackbaud University. He leads trainings in classrooms throughout the U.S. and in online environments. Will has been a leader in education for several software programs, including film editing, web design, and accounting software.
Will attended Slippery Rock University of Pennsylvania where he earned a B.S. in Emerging Technology and Multimedia. Following graduation, Will moved to California to attend San Diego State University and earned an M.A. in Film and Television Production. While attending San Diego State, Will wrote, produced, and directed several short films and was on the selection committee for numerous film festivals.
Will enjoys writing short stories, baseball, and saying “hello” to every dog he meets. Will currently resides in Southern California with his partner and their Pembroke Welsh Corgi, Hemi. 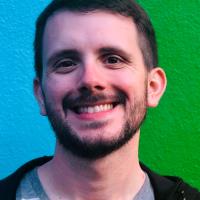